The Chiropractic Alumni traces its history back to 1984 as a great venture commenced by graduates Geoff Irvine, Mark Uren and others from the Sydney College of Chiropractic Class of 1983. They created The Sydney College of Chiropractic Alumni Association.  In the book A History of The Sydney College of Chiropractic.  A Pathway to a Profession:  it is documented that Dr Geoff Irvine graduate of the 1983 Class founded the SCC Alumni on 14 April 1984 and was elected the inaugural President.  The goal of the SCC alumni was to foster continuing education for students and practitioners through the SCC and comradeship within the profession.  Special functions would be held throughout the year, culminating in a Homecoming weekend in conjunction with the SCC Graduation Ball.  A newsletter was created to keep all members informed of alumni activities.  This new association commenced fundraising events to purchase equipment for the College and the Outpatients Clinic and social events.  Their work was continued for a good many years. 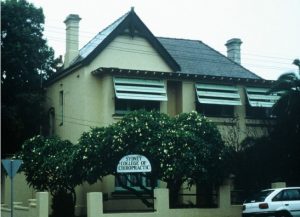 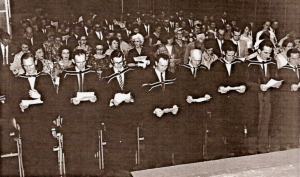 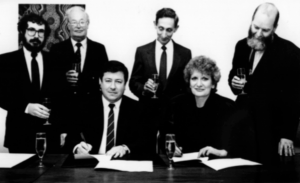 At the end of 2003, the Sydney College of Chiropractic (SCC) started a drive to improve the engagement with all of our graduates.  At that time, the status of the SCCMUAA (Sydney College of Chiropractic and Macquarie University Alumni Association) was not operational.  The SCC College Council endorsed a plan to a merge with SCCMUAA, and thus was achieved in late 2004.  In the meantime, a steering committee to plan the alumni association and the merger consisting of Melanie Browell, Stephanie Le Coz, Maggie Nalbandian and Anthony O’Reilly.  A new name was devised: The Chiropractic Alumni (tCa), a new logo and a set of goals, strategies and mission. The following goals were set:

The goal of The Chiropractic Alumni is to provide continuity and a sense of pride amongst the graduates of the Sydney College of Chiropractic and Macquarie University.

The tCa will contribute to the student life, host contrinuing education seminars and fundraising activities in an effort to bring chiropractors together in a fun, worthwhile environment.

The continuing education of tCa members, professional support to new graduates and mentoring systems are a great focus of tCa.

Clearly from 2004 onwards, the intent was to fulfil this mission and re-engage with our graduates and to develop the spirit of collegiality with new graduates as early as possible.  The tCa ‘launch’ was a full day seminar in September 2004, blending Gary Stavrou’s “The Art” – techniques and experience, Henry Pollard’s expertise in “Clinical Pearls in Sports chiropractic”; “The Science”; with Dr Robyn Beirman presenting “Differential Diagnosis Made Simple”; “The Philosophy”, with Dr Philip Morphew leading a goal setting session; Julie Uren (midwife and at that stage a 4th year chiropractic student – and assisted by husband Mark) who demonstrated “The Power of Innate Intelligence” and birth trauma; and Dr Ashish Diwan, who gave a presentation about modern spinal surgery and intervertebral disc replacements.  The dinner that evening was another success, John Cice who was awarded the Knox Medallion, and Allan Dickinson have a keynote address.

The tCa was the (new) natural part of the College to manage the annual Graduation Ball and the next Ball for the Class of 2004 was conducted at the same venue as the above seminar at North Sydney..

Keith Phillips had compared the way Palmer College graduates had gathered at national professional events and tCa took up this challenge and led the other schools in our wake.  Our first big event of this nature was a breakfast at the WFC Congress in Sydney at The Novotel in Darling Harbour in June 2005, and we also used the occasion to launch Stephen Esposito and Scott Philipson’s textbook – The Chiropractic Art.  Over 50 keen graduates attended.

Using the same venue for the next seminar and our first real attempt at class reunions, we also started to tie in the annual SCC Governors meeting with the tCa event.  This was not new, though the aim was to build tradition and reward loyalty.  The seminar   gave Stephen Esposito and Scott Philipson an opportunity to give an update on diversified technique with extracts and demonstrations from their new text; Peter Bull presented “Corrective Chiropractic – how good is the evidence?, Angus Steventon on his experiences providing chiropractic to remote areas of the war-ravaged East Timor; and John DeVoy demonstrated his passion for chiropractic and its philosophy.

The reunion dinner was the first presentation of the PowerPoint slideshow by John Kelly and John Cice of ‘Blast from the Past’.  The material mostly covered the earlier days and faces from the College and apart from providing surprises and memories, John and John hoped to gain some detail from the audience to identify some unknown personalities shown.  Class reunions were held for the Classes of 1970, 75, 85, 90, and 1995.

From the time of the initial launch, tCa started publishing regular newsletters and had boldly created two versions – a professionally printed colour ‘Chirobiz’ for members and general dissemination, and a light ‘Chitchat’ for in-between for members.  I clearly remember Keith Phillips’ shock that we would publish in colour – a frivolous use of College funds.